What the Allies Knew

As early as May 1942, and again in June, the BBC reported the mass murder of Polish Jews by the Nazis. Although both US President, Franklin Roosevelt, and British Prime Minister, Winston Churchill, warned the Germans that they would be held to account after the war, privately they agreed to prioritise and to turn their attention and efforts to winning the war. Therefore, all pleas to the Allies to destroy the death camp at Auschwitz-Birkenau were ignored. The Allies argued that not only would such an operation shift the focus away from winning the war, but it could provoke even worse treatment of the Jews. In June 1944 the Americans had aerial photographs of the Auschwitz complex. The Allies bombed a nearby factory in August, but the gas chambers, crematoria and train tracks used to transport Jewish civilians to their deaths were not targeted.

REACTION OF THE CHURCHES

As German society became increasingly Nazified at every level, the Christian churches also fell in line. The Roman Catholic Church believed it was protected by the 1933 concordat between Hitler and the Vatican granting freedom of practice to the Catholic Church in Germany, with the understanding that the church would not meddle in politics. Hitler did not live up to his part of the bargain.

The concordat, negotiated by Papal Secretary of State Eugenio Pacelli, the formal papal nuncio in Berlin and the future Pope Pius XII, was widely regarded as a diplomatic victory for Hitler. It diminished the influence of the Catholic centre party and Catholic labour unions in Germany. Notwithstanding its protests against Nazi euthanasia policy, the Roman Catholic Church became subservient to the regime.

With the exception of a few pastors who resisted Nazi domination, the Protestant churches were also caught up in the zealous nationalism sweeping Germany. The Nazi inspired German Christian Faiths Movement took over mainstream church offices, proclaiming: “In the person of the Fuhrer we behold the One sent from God who places Germany in the presence of the Lord of history”.

An opposition group, known as the Confessional Church, spoke out against the regime’s Nazi racial and anti-Christian teachings. It was led by the Reverend Martin Niemöller, the most prominent of hundreds of pastors and laymen arrested beginning in 1936.

In the last sermon preached by Niemöller before his arrest and consignment to Dachau, he said: ”No more are we ready to keep silent at man’s behest when God commands us to speak…We must obey God rather than man.” 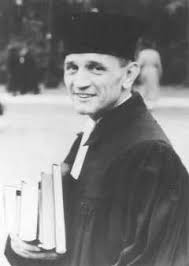