The Jews were permitted to take only a few personal items when forced to relocate to the ghettos. The process of relocation not only robbed them of their property, but also was carried out in a brutal manner calculated to humiliate the victims.

Ghettos were administered by Nazi-imposed Judenräte (Jewish councils), led by a chairman. Members of the Jewish councils were coerced to comply with the orders of the Nazi leadership. Members of the Judenräte tried to ameliorate the inhumane orders of the Nazis wherever possible. A Jewish police force implemented the orders of the German leadership as well as the decrees of the Judenräte, including rounding up Jews for forced labour, and forcible evictions of ghetto inhabitants from their homes prior to being sent to the Umschlagplatz (collection point or relocation point where Jews were gathered before deportation to the death camps). The Jewish police also aided in the process of herding Jews into packed, sealed and locked freight trains.

Ghetto inhabitants were forced to endure severe overcrowding, appalling housing and unsanitary conditions, starvation and disease. The daily rations were 300 calories per Jew, compared with 634 calories per Pole and 2,310 calories per German. Terror (from marauding Germans) and round-ups for forced labour were daily occurrences.

In spite of the oppressive conditions, Jewish communal and voluntary organisations attempted to provide aid and welfare for the inhabitants. Zionist and non-Zionist youth movements established schools, living quarters and soup kitchens for their members. Through books, newspapers, music and theatre these organisations tried to ameliorate the harsh realities of ghetto life. Artists, intellectuals, historians, children and ordinary individuals scrounged materials to write and paint in order to document the horror that 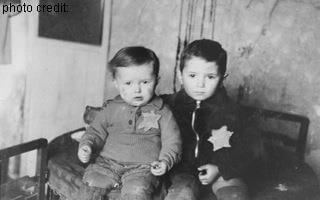 pervaded their lives and the suffering of their communities. Food smuggling was punishable by death but survival was impossible without it. Smuggling continued as long as the ghetto existed. It was carried out through inter-connecting underground to buildings beyond the ghetto walls on the ‘Aryan’ (non-Jewish) side. Smuggling on a larger scales operated through the ghetto gates, involving policemen and guards — German, Poles and Jews. All received bribes for allowing the smuggled goods ‘safe passage’.

Smuggling on a small scale was also engaged by children (as young as 7 or 8) and women, who, at the risk of their lives, secreted themselves out of the ghetto in order to bring back food for their families. The smuggling operation was a complex initiative that at times involved maintaining links with former non-Jewish business partners and accomplices outside the ghetto.

Hardly a day passed without people being caught and executed. The casualties did not deter smuggling or bring it even to a temporary halt. The alternative was starvation.

Crowded living conditions starvation diets and limited sanitary facilities led to the death of over 800,000 Jews in the ghettos. Records and diaries attest to the important role that the smugglers played in helping the ghettos survive in the face of German cruelty.

Children played such a key role in these enterprises that the ghetto inhabitants believed that once the war was over a memorial to the Unknown Child — the child smugglers — should be erected.