On 20 January 1942 in Wannsee, a suburb of Berlin, top-ranking Nazi officials, including Adolf Eichmann, Chief of the Reich Security Main Office’s Department IV B4 (Jewish Affairs), commanders assembled for a crucial meeting chaired by Reinhard Heydrich. There were two important reasons for this meeting: to inform and ensure support from government ministries and other departments for the implementation of the ‘Final Solution’; and to emphasise that Hitler himself had tasked Heydrich and the Reich Security Main Office (RSHA) with co-ordinating this initiative. The debate was not about whether such a plan should be adopted – the order had already been given – but how it should be executed. 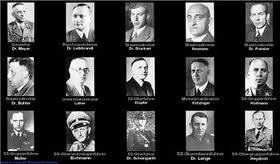 Most of those in attendance already knew that the Nazi regime had been involved in mass killing of the Jews, and other civilians, in the German-occupied areas of the former Soviet Union. Some were even aware of the actions of the Einsatzgruppen and other police units in murdering tens of thousands of Jews in the occupied regions of the former Soviet Union. There was no voice of dissent, or objection.