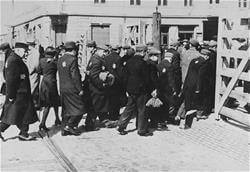 Under the authority of Hitler, the marginalisation, persecution and isolation of German Jews was carried out in stages. After the Nazi party gained power in Germany in 1933, its state-fostered racism led to discriminatory anti-Jewish legislation, denial of civil and political rights and economic restrictions, culminating in the violence and brutality of Kristallnacht (Night of Broken Glass). All of these acts and policies were aimed at systematically excluding Jews from German society and forcing them to emigrate.

After the German invasion of Poland, in September 1939 — the beginning of World War II — the anti-Jewish ‘agenda’ intensified to encompass the incarceration and eventual extermination of European Jewry. The Nazis initially created ghettos (sealed off areas intended to segregate, concentrate, subdue and control the Jewish populations within). Polish and western European Jews were forcibly transported to these geographically designated places, where they lived in dismal conditions — over-crowded, unhygienic and lacking adequate food.