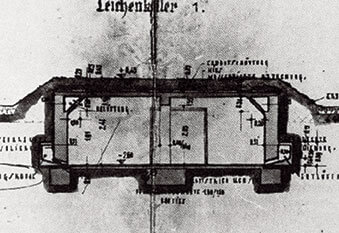 From 1941 onwards, six camps were designated as Vernichtungslager – extermination camps. Chelmno, Belzec, Sobibor, Treblinka, Majdanek and Auschwitz-Birkenau. They were specifically designed to implement The Final Solution. They were situated in Poland, the country with the largest Jewish population. In these camps the Nazis constructed gas chambers (sealed rooms that could be filled with poisonous gas) to maximise killing efficiency. As the deportation trains arrived, the majority of those on board were sent from the railway sidings directly to the gas chambers. At the largest killing centre – Auschwitz-Birkenau – two of the gas chambers and adjoining crematoria were located on either side of the railway terminus.

Unlike concentration camps, which principally served as detention and labour camps, death camps were almost exclusively ‘factories of death’. By 1943, Auschwitz-Birkenau operated four gas chambers. Hundreds of Jews were crammed into each of these rooms. The door was then sealed shut and pellets of Zyklon B (consisting of hydrogen cyanide or prussic acid) were removed from a sealed container and tipped into the room through vents. On being exposed to the air the pellets dissolved into a highly toxic gas. It took about 20-30 minutes for all of the people in the gas chamber to choke to death on the gas.

At the high point of deportations, as many as 6,000 Jews were gassed each day at Auschwitz-Birkenau. More than one million Jews and tens of thousands of Romas/Gypsies, Poles and Soviet prisoners-of-war had been murdered there by the time the camp was liberated by Soviet forces in January 1945.

A small number of Jewish prisoners were forced into special work units known as the Sonderkommandos. Their task was to prepare Jews arriving at, or already in, the camp for the gas chambers in the disrobing rooms. Then came the ghastly work of removing the bodies from the gas chambers, extracting gold fillings from the corpses and cremating the bodies in ovens or open pits.

The SS attempted to keep the existence of the death camps secret. Jews sent to the gas chambers were usually unaware of what was about to happen to them. They were told instead that they were being sent for showers and ‘delousing’. (The explanation was plausible because the camps were regularly afflicted by plagues of disease-bearing lice). Because of their intimate knowledge of the process of Nazi mass murder, the Sonderkommandos were considered Geheimnisträger (bearers of secrets) and as such, were kept in isolation from other prisoners. Since the Nazis did not want the Sonderkommandos’ knowledge to reach the outside world, they followed a policy of gassing most of them and replacing them with new arrivals at intervals of approximately four months.