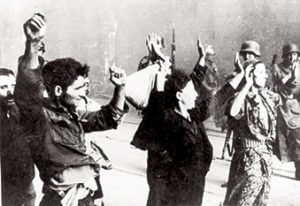 The Warsaw Ghetto Uprising 1943
In the rare instances when Jews had access to weapons and ammunition, these were in small quantities and of inferior quality. Nevertheless, Jewish civilians offered armed resistance in over 100 ghettos in occupied Poland and the Soviet Union. The largest armed uprisings took place in the ghettos of Warsaw, Vilna and Bialystok.

During a two-month operation, between 23 July and 21 September 1942, over 254,000 residents of Warsaw were rounded up as part of Operation Reinhard and killed at Treblinka. This left a remaining Jewish population in Warsaw of between 55,000 and 60,000.

In response to the deportations, on July 28, 1942, several Jewish underground organisations created an armed self-defence unit known as the Jewish Combat Organization(Zydowska Organizacja Bojowa; ZOB), led by 23-year-old Mordecai Anielewicz. The Revisionist Party (right-wing Zionists known as the Betar) formed another resistance organisation, the Jewish Military Union (Zydowski Zwiazek Wojskowy; ZZW). Despite initial tensions between the two groups, they decided to work together to oppose German attempts to destroy the ghetto. At the time of the uprising, the ZOB had about 500 fighters in its ranks and the ZZW had about 250.

In January 1943, the Jews learned that the Germans planned to transport all the remaining people to Treblinka. The ZOB issued a proclamation calling for the Jews to resist.

In their first battle on January 18, the ghetto fighters used a small supply of weapons that had been smuggled into the ghetto, firing upon German troops as they tried to round up a group for deportation. After a few days, the troops retreated and suspended the deportations.

On 18 April 1943 Himmler appointed Jürgen Stroop, an SS general who had experience in fighting partisans, to the command of the Warsaw district. On the morning of 19 April 1943, SS and police units entered the ghetto to deport its surviving inhabitants. 750 Jewish fighters armed with a handful of pistols, rifles and Molotov cocktails faced more than 2,000 heavily-armed and well-trained German troops supported by tanks and flamethrowers.

Again the Germans were forced to withdraw with heavy losses and return with more firepower. The Jewish resistance fought with extraordinary bravery but were inevitably overwhelmed by the Nazis sheer strength of numbers and firepower. After several days, Stroop ordered the ghetto burned to the ground building by building. On 8 May 1943 the headquarters bunker of the ZOB was taken. Its defenders, including Mordecai Anielewicz, were killed in the fighting, but a number of fighters escaped.

On 16 May, Stroop reported that “the Jewish quarter of Warsaw no longer exists.” His forces had captured 56,065 Jews, who were promptly transported to Treblinka, and some thousands had been killed in the uprising. Similar revolts took place at about this time in almost all the ghettos and killing centres in Poland. None succeeded against the overwhelming force of the Nazis’, but a few people managed to escape from the ghettos and join Jewish and non-Jewish partisan groups in the forests.