At the end of the war many Germans claimed ignorance of the genocide. Yet there were 900,000 Germans in the SS and several million in the regular armed forces, police and government bureaucracies. There were 500,000 clerical and 900,000 manual workers in the railway network, which was key to transporting Jews to the camps. Letters and photographs sent home by German soldiers at the front frequently documented the atrocities. German officer Helmuth von Moltke wrote to his wife in August 1941 referring to the slaughter of Jews:

“What will happen when the nation as a whole realises this war is lost … with a blood guilt that cannot be atoned for in our lifetime and can never be forgotten.”

Ordinary Germans were beneficiaries of the persecution and murder. In one six-week period, 222,269 sets of men’s suits and underclothes, 192,652 sets of women’s clothing and 99,922 sets of children’s clothes, all collected from gassed victims at Auschwitz, were distributed among civilians in Germany. A total of between 15 and 20 billion Reich Marks were deposited in German banks, representing the proceeds of the theft of the savings, property and possessions of murdered European Jews.

The Nazis were aided in their crimes by collaborators from many of the Axis nations which were Germany’s allies and the puppet states which they set up in conquered territory. Each state responded differently to the Nazi extermination program, with significant variations in the level of co-operation and, sometimes, active opposition (See “Righteous Among the Nations”).

Austrians, including Adolf Hitler and Adolf Eichmann, were prominent in the Nazi leadership and the Einsatzgruppen. They provided one third of the personnel of the SS extermination units and commanded four of the six main death camps.

In Romania General Ion Antonescu led a coalition government of military officers and the fascist Iron Guard. In a gruesome episode during a three-day civil war in 1940, the Iron Guard hanged dozens of murdered Jews on meat-hooks in the slaughterhouse of Bucharest. This government was responsible for the deportation of Jews to camps in Transnistria in Romanian-occupied Ukraine, where approximately 270,000 died as a result of neglect, starvation and disease.

Romanian troops working with Einsatzgruppen D in southern Russia were considered cruel and barbarous even by the Germans because, among other reasons, they often refused to bury the corpses of Jews they had murdered.

In Ukraine, Byelorussia and the Baltic States, traditional Christian antisemitism was exploited by propaganda identifying Jews with Bolshevism and the crimes of Stalin, which had claimed the lives of millions. (In fact, Jews had been among those whom Stalin treated most harshly). Many Eastern Europeans were receptive to Nazi ideology and intimidated by German military power. The result was enthusiastic participation in the mass killings by various antisemitic groups.

The Hungarian government under Admiral Horthy sent some 20,000 German-Jewish refugees back to Germany in 1941. The government also conscripted Jews for forced labour, and at least 27,000 died as a result. However the Horthy government refused to permit the deportation of Hungarian Jews to the Nazi death camps.

In March 1944 Nazi troops occupied Hungary and installed a puppet government which deported almost 440,000 Hungarian Jews to Auschwitz between May and July 1944. Thereafter, the Hungarian fascist and antisemitic organisation, Arrow Cross, was turned loose against the remaining Jewish population, murdering thousands in mass shootings and committing numerous other atrocities.

Slovakia declared itself an independent state in 1939 under the leadership of a Catholic priest, Jozef Tiso, who was responsible for the deportation and deaths of approximately 75,000 Jews from Slovakia and the confiscation of their property. Indeed, Slovakia made an agreement to make a payment to Germany of 500 Reichsmark for every Jew deported, provided that Germany would make no claim on the property abandoned.

Croatia, governed by the fascist Ustashi organisation under Ante Pavelic, had its own concentration camp system, with the largest camp at Jasenovac, where many thousands of political opponents and ethnic minorities were killed, including Serbs, Jews and Roma. About 20,000 Jews were either murdered by the Ustashi or deported to Auschwitz, of whom about 5,000 survived. In Serbia 90 per cent of the Jewish population of 17,000 were killed in mobile gas vans or by mass shooting.

In France there were no fewer than 10 antisemitic political organisations before the war calling for the destruction of the Jews, and some 77,000 Jews were deported to the extermination camps with the help of the Vichy French authorities. However, most of the French declined to collaborate with the genocide policy, and three-quarters of the French Jews survived, many hidden by Church institutions and Christian families. 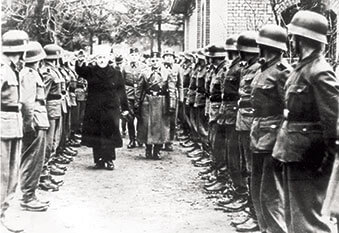 Among the Nazis’ most enthusiastic supporters were Palestinian political leader Grand Mufti Haj Amin al-Husseini and his followers. After 1941 al-Husseini resided in the German capital, Berlin, as Hitler’s special guest, advocating the extermination of Jews in radio broadcasts to the Middle East and recruiting Balkan Muslims for infamous SS “mountain divisions” that tried to destroy Jewish communities throughout the region.

He wrote in his memoirs: “Our fundamental condition for co-operating with Nazi Germany was a free hand to eradicate every last Jew from Palestine and the Arab world.” Al-Husseini also wrote that in July 1943 Himmler informed him that the number of Jews “so far exterminated” in Europe was “about three million”.

Al-Husseini intervened to stop an attempt by Red Cross officials to negotiate the exchange of 4,000 Jewish children from Poland, resulting in the children being sent instead to Auschwitz. He also wrote to the foreign ministers of both Romania and Hungary, requesting them to send their Jewish population “to Poland”. 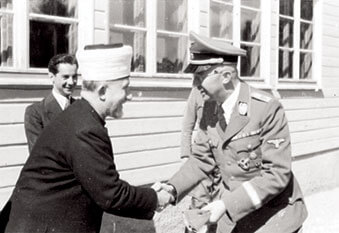 SS-Captain Dieter Wisliceny, one of Adolf Eichmann’s henchmen, testified during his trial in Nuremberg that al-Husseini was “one of the initiators of the systematic extermination of European Jewry and had been a collaborator and advisor of Eichmann and Himmler in the execution of this plan….He was one of Eichmann’s best friends and had constantly incited him to accelerate the extermination measures. I heard him say, accompanied by Eichmann, he had visited incognito the gas chamber of Auschwitz.” Palestinian nationalists continue to regard al-Husseini as a hero.

More commonly, bystanders responded to Nazi crimes with silence. Throughout the Holocaust not a single government, social group, scholarly institution or professional association in Nazi-dominated Europe openly declared its solidarity with the Jews. That includes the Catholic and Protestant churches.