Antisemitism, (often also spelled, ‘anti-Semitism’), is not directed at Semitic languages or Semitic peoples as a whole. 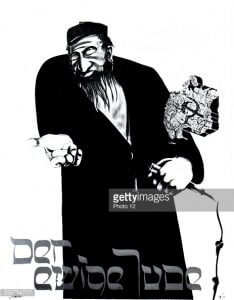 It means prejudice or hatred directed against Jews. The German word ‘Antisemitismus’ (‘antisemitism’) was coined in 1879 by the German journalist, Wilhelm Marr, to replace the traditional word Judenhass (“hatred of Jews”) which denoted hatred of Jews for religious reasons. Marr subscribed to the pseudo-scientific theory that humanity consists of a hierarchy of races, and believed that Jews were immutably inferior to other people for biological reasons. Thus, ‘antisemitism’ expressed hatred of Jews on the basis of so-called “race science” (which has long since been discredited), rather than on the basis of religion or theology. The reliance on racial pseudo-science rather than religion was deemed necessary by Jew-haters because Europe was seen to be becoming less religious and more secular, and the anti-Judaism of Christianity was becoming less relevant.

Hostility to Jews dates back to ancient times. Pagan antisemitism in the Greek and Roman world objected to Jewish exclusiveness. The rise of Christianity added a dangerous new and false accusation: that collectively and for all time, the Jews were responsible for crucifying Jesus. The early Christian Church developed the notion that the Jews were therefore a people rejected by God: children of the devil. (See John 8:44.) With the political victory of Christianity in the Roman Empire, these theological views were translated into social reality. With few rights and treated as without honour, the Jews were to be preserved as a people to witness the triumph and ‘truth’ of the Church.

Demonisation of Jews by the Church and their resulting inferior social and political status were carried over into medieval Europe. The conspicuous success of Jews as money-lenders (one of the few vocations permitted to Jews because it was forbidden to Christians) became a further factor in the growth of popular antisemitism. During the Crusades this antisemitism broke out into mob violence (‘pogroms’), which entailed the massacre of Jews and looting of their property. New anti-Jewish myths were developed: the ritual slaughter of Christian children, the desecration of the sacred Host and the poisoning of wells. These were slanderous fabrications which persisted powerfully, especially in Eastern Europe, until the twentieth century.
Read More…