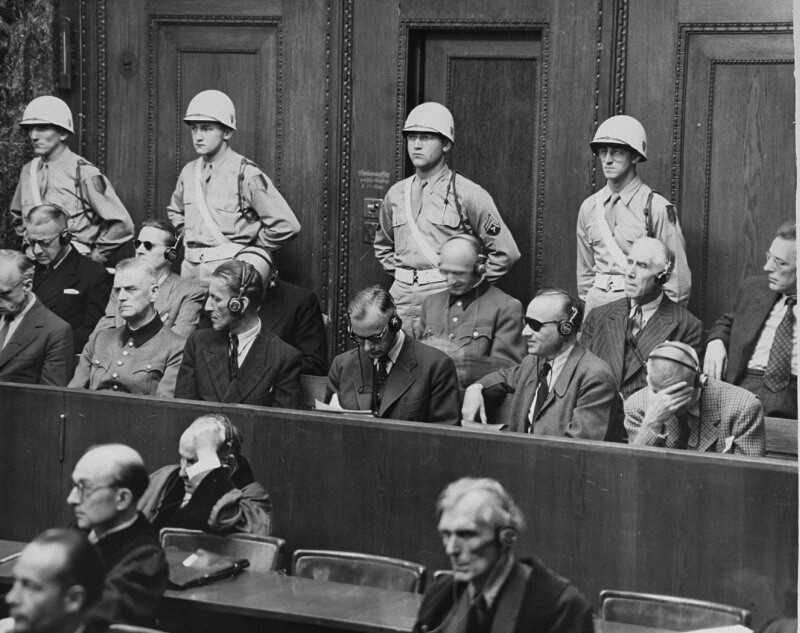 On 17 December 1942 the leaders of the United States, Great Britain and the Soviet Union issued the first joint declaration officially noting the mass murder of European Jewry and resolving to prosecute those responsible for crimes committed against civilian populations.

The International Military Tribunal opened in Nuremberg, Germany, on 20 November 1945 with 24 defendants representing the most senior and responsible political, administrative, military and police officials of the Nazi regime who had established the policy of genocide against the Jewish people and ordered its implementation.

The tribunal indicted the defendants on charges of crimes against peace, war crimes and crimes against humanity, and defined crimes against humanity as “murder, extermination, enslavement, deportation…or persecutions on political, racial or religious grounds.” These were now explicitly acknowledged as grave crimes under international law. The court ruled that the excuse of “following superior orders” was not a legitimate defence, but in the subsequent “de-nazification” trials before the West German courts, the “superior orders” defence was accepted as a mitigating circumstance in reduction of penalty.

Adolf Hitler, Heinrich Himmler and Joseph Goebbels did not stand trial as they had committed suicide before the end of the war. Twelve defendants were sentenced to death, among them Hermann Göring, Joachim von Ribbentrop, Hans Frank and Julius Streicher. Only Göring escaped hanging; he committed suicide the night before his scheduled execution.

The prosecutions were based on a massive volume of documents written by the Nazis themselves, as well as eyewitness testimony. Testimony presented at Nuremberg revealed much of what is now known about the Holocaust, including the details of the Auschwitz death machinery, the destruction of the Warsaw Ghetto, and the estimate of six million Jewish victims.