Arthur A. Calwell was appointed Australia’s first Minister for Immigration in July 1945. Under his leadership, Australia developed an immigration policy that, for the first time in Australian history, regarded non-British immigrants as a suitable immigrant source. Responding to the anti-refo sentiments expressed before the war, the post-war Labor government secretly introduced bureaucratic measures to limit the number of Jewish Holocaust survivors permitted to enter Australia. These included restrictions on the percentage of Jewish survivors permitted on any particular ship leaving Europe to 25% of the total number of passengers.   This quota was later extended to Jews arriving by air. Other discriminatory restrictions included a strict quota for Jewish arrivals to 3,000 per annum, even though the annual pre-war quota had been 5,000; exclusion of Jews from the mass migration programs, particularly the International Refugee Organisation which brought 170,000 non-Jewish Displaced Persons (DPs) to Australia; and in December 1949 what became known as ‘the iron curtain embargo’, which prevented privately sponsored immigrants arriving from countries behind the iron curtain, including Hungary and Poland where most Jewish survivors came from.

Before World War II, around 20,000 Jewish refugees managed to escape from Europe to Shanghai, then under Japanese rule, where they did not require a formal visa. After the war, the Chinese Nationalist government insisted that these stateless Jews leave immediately. Initially it appeared as though 2,000 of them would be given permission to migrate to Australia, but in the end only a few hundred Jews were permitted to migrate from Shanghai. This was because in July 1947 the Australian consul-general, Major-General O. W. C. Fuhrman, sent a top-secret report to the Federal Government, which falsely portrayed Jews as the criminal element of Shanghai. Later, the new Australian consul general told a Jewish representative: “We have never wanted these people in Australia and we still don’t want them. We will issue a few visas to those who have relations there as a gesture”. MIGRATION OF SURVIVORS AND RELIEF EFFORTS

Transformation of the Jewish community

Jewish survivors arriving in Australia from Europe after 1945 continued to bring about changes in the Jewish community’s religious, social and cultural life so that the face of Australian Jewry changed from a purely religious group to a diverse and multi-faceted community. Orthodoxy was strengthened with the establishment of the first Yeshiva, a rabbinical training seminary, by the Hasidic movement, Chabad, in Victoria. Another key development was the establishment of Jewish private schools. Whilst Moriah College was founded during the war years, four additional Jewish schools were established in Sydney in the post-war years. In Melbourne, the most successful Jewish day school in the postwar period was Mount Scopus College, which opened in Melbourne in 1949. By the early 1960s, Melbourne hosted a number of day schools with a range of ethoses reflecting the Jewish religious and ideological spectrum. Jewish schools were also established in Brisbane, Perth and Adelaide. Support for Zionism also increased, and Yiddish culture was strengthened by the arrival of the survivors. Love of football led to the formation of the Hakoah Club in Sydney, beginning as a sporting club but becoming the community’s main social and cultural meeting point.

Since World War II, Jews have continued to make a substantial contribution to Australian society, particularly in business, the professions and the arts. Most Jewish immigrants embraced their new life in Australia.This was particularly true for the post-1945 refugee groups. For the survivors of the Holocaust, the greatest benefit was living in a free, democratic society. They no longer feared that someone would knock on the door in the middle of the night waiting to take them away with a pair of handcuffs. Contributors in business included Frank Lowy, who arrived as an almost penniless young man and went on, in partnership with fellow survivor John Saunders, to develop the Westfield shopping centre group. In the art world, Hungarian survivor, Judy Cassab, made outstanding contributions to portraiture, whilst amongst the survivors were also many significant musicians.

Historian Professor Suzanne Rutland’s parents were the ‘lucky ones’ – they found safe haven in Australia, arriving on the Stratheden from Belgium in January 1939. Her father, Naftali Benjamin (Nat) Perlman, was born in Krakow, Poland, in 1901 but moved to Antwerp in the 1920s and went into the diamond business. Her mother, Perla Freilich, was from Lesco, a small town on the Polish/Ukrainian border and met her father on a family visit to Antwerp. They married in 1933 and her older brother was born in 1936. By 1937 her father’s watch factory was so successful that the King of Belgium invited him to exhibit some of his designs at the Paris International Expo. However, Perla visited her parents regularly, and her trips across Germany convinced her that they had to leave Europe and join two of her brothers in Sydney. Her determination saved their lives. All four of Suzanne’s grandparents were murdered with only one survivor from her mother’s side of the family – a cousin who jumped the train on its way to the death camp, Treblinka. Suzanne’s father’s family was luckier – two uncles, Chaim and Jacob Perlman, were saved by Oscar Schindler, and a third, Moniek Perlman, managed to survive, ending up in Mathausen. After the war, Suzanne’s parents sponsored all the Perlman survivors to Sydney, with five members of family arriving on the Johan de Witt, the only ship where the 25% quota did not apply – again the luck of fate! Perla Freilich and Naftali Benjamin
(Perlman) on their wedding day 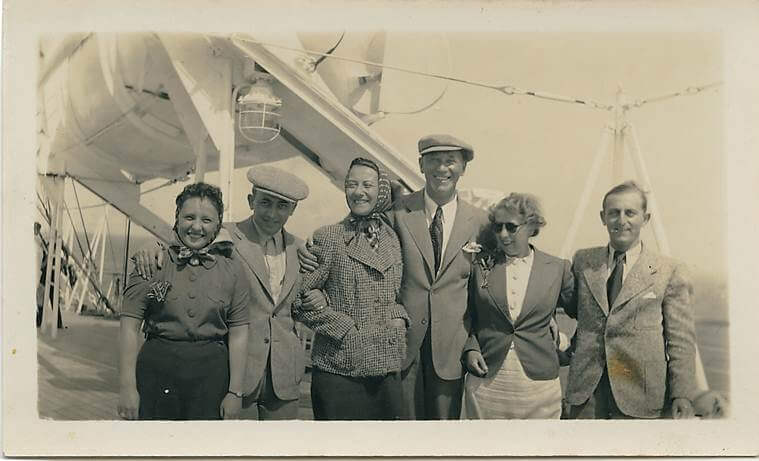 Arriving on the Stratheden from
Belgium in January 1939