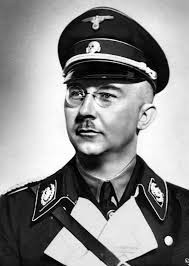 Heinrich Himmler (1900-1945) was Reichsführer-SS (Commander of the Schutzstaffel (SS)). Hitler appointed him Commander of the Home Army and General Plenipotentiary for the administration of the entire Third Reich — Generalbevollmächtigter für die Verwaltung. After Hitler, Himmler was the most powerful man in Nazi Germany, and a key architect of the Final Solution (the extermination of European Jewry during the Holocaust).

He joined the Nazi Party (NSDAP) in 1923, and participated that year in Hitler’s failed putsch against the Bavarian government. He joined the SS in 1925. Over the next 16 years he turned the SS from a mere 200-man battalion (acting as Hitler’s body guard), into an elite, formidable and ruthless organ of the Nazi Reich.

On Hitler’s orders, Himmler established and controlled the vast network of Nazi concentration camps. As its head, Himmler was responsible for the murder of 6 million Jews, between 200,000 & 500,000 Roma (Gypsies), and untold millions of other victims (mostly Poles and Soviet/Russian citizens). From 1943 onwards, Himmler was both Chief of German Police and Minister for the Interior, overseeing both internal and external Reich police and security forces, including the Gestapo (the Secret State Police).

Shortly before the end of World War II, realising the imminent defeat of Germany, Himmler attempted to make peace with the western Allies, without Hitler’s knowledge. When Hitler learned of this he was outraged, and stripped Himmler of all his posts. In April 1945, Hitler ordered that Himmler be arrested. At the end of the war Himmler attempted to escape from Germany but was captured by British soldiers. He committed suicide in custody in May 1945, before he could be bought to trial as a war criminal.