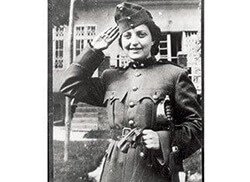 Hannah Szenes (1921-1944) was born to a wealthy, distinguished and assimilated Hungarian-Jewish family. She confronted antisemitism in high school and became interested in learning more about her Jewish heritage. It was at this time that she joined a Zionist youth movement and learnt Hebrew in preparation for migrating to Palestine. In 1939, having completed her studies, Szenes went to Palestine.

In 1943 she was approached by Jewish Agency representatives to join a clandestine military operation, the purpose of which was to offer aid to beleaguered and forsaken European Jewry. In March 1944, she and several other Jewish volunteers were parachuted into Yugoslavia in order to support anti-Nazi partisan forces, until they were to cross the border into Hungary, and begin their mission. Szenes crossed the border of her former motherland in June 1944, three months after the German military invasion and occupation of Hungary. Captured within hours of setting foot on Hungarian soil, she was imprisoned in Budapest where she was brutally tortured by Hungarian authorities hoping to break Allied wireless codes. They failed to do so. She did not relent.
Being a Hungarian national, she was tried as a spy and convicted of treason. She was executed by a firing squad on 7 November 1944.

‘Blessed is the Match’ is documentary feature about Hannah Senesh, the World War II poet and diarist who became a soldier, martyr and Jewish heroine.