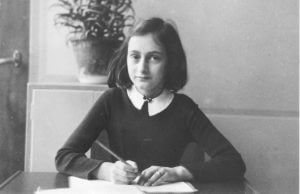 Anne Frank (1929-1945) was a young Jewish diarist and aspiring writer. She is one of the most well- known victims of the Holocaust. She gained international fame posthumously for her diary – The Diary of a Young Girl – which was published after the war. One of the most powerful memoirs of the Holocaust, it documents her hopes, dreams, family conflicts and experiences whilst in hiding during the German occupation of the Netherlands, during World War II.

The Frank family relocated from Germany to Amsterdam in 1933, the year the Nazis gained control in Germany. By 1940 the family was trapped in Amsterdam by the German occupation of the Netherlands. As the persecution of the Jewish population escalated in 1942, the family and others — the van Pels: Herman, Auguste, and 16-year-old Peter, and somewhat later, by Fritz Pfeffer, a dentist and friend of the family, went into hiding in some concealed rooms in the building in which Anne’s father had worked. After two years, the group was betrayed and deported to concentration camps. In early 1945, Anne and her sister Margo were eventually transferred to Bergen Belsen, where they died of typhus. She was just shy of her sixteenth birthday.

Otto Frank, the only survivor of the family returned to Amsterdam after the war to find that Anne’s diary had been saved, and he devoted his efforts to its publication in 1947.