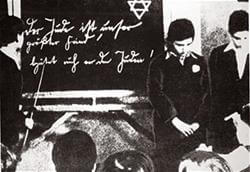 On 15 September 1935, the Nuremberg Race Laws, the Reich Citizenship Law and the Law for the Protection of German Blood and Honour were enacted, stripping the Jews of their citizenship and forbidding marriage between Jews and non-Jews. “Jews” were defined as persons having at least three Jewish grandparents, but the criteria defining a grandparent as ʺJewish” were unspecified. Complex rules applied to those who were of “mixed bloodʺ defined as those having only one or two Jewish grandparents. The effect of these laws was to ostracise Jews from German society. They were not allowed to participate in the commercial, cultural or artistic areas of German life, and were stripped of most of their civil and political rights.

“Darwinism by itself did not produce the Holocaust, but without Darwinism… neither Hitler nor his Nazi followers would have had the necessary scientific underpinnings to convince themselves and their collaborators that one of the world’s greatest atrocities was really morally praiseworthy.”
― Richard Weikart, From Darwin to Hitler: Evolutionary Ethics, Eugenics, and Racism in Germany
MENU